Owens Corning (NYSE:OC – Get Rating) last released its quarterly earnings results on Wednesday, July 27th. The construction company reported $3.83 earnings per share (EPS) for the quarter, beating analysts’ consensus estimates of $3.31 by $0.52. The business had revenue of $2.60 billion during the quarter, compared to the consensus estimate of $2.58 billion. Owens Corning had a return on equity of 26.22% and a net margin of 12.20%. The business’s quarterly revenue was up 16.2% compared to the same quarter last year. During the same period in the previous year, the company posted $2.60 EPS.

The firm also recently declared a quarterly dividend, which was paid on Thursday, August 4th. Shareholders of record on Monday, July 18th were paid a $0.35 dividend. The ex-dividend date was Friday, July 15th. This represents a $1.40 annualized dividend and a yield of 1.62%. Owens Corning’s payout ratio is 12.44%.

In other news, VP Kelly Schmidt sold 1,940 shares of the company’s stock in a transaction that occurred on Friday, July 29th. The stock was sold at an average price of $91.93, for a total transaction of $178,344.20. Following the sale, the vice president now directly owns 15,083 shares of the company’s stock, valued at approximately $1,386,580.19. The sale was disclosed in a legal filing with the Securities & Exchange Commission, which can be accessed through this hyperlink. 0.44% of the stock is currently owned by corporate insiders.

Owens Corning manufactures and markets insulation, roofing, and fiberglass composite materials in the United States, Canada, Europe, the Asia Pacific, and internationally. It operates in three segments: Composites, Insulation, and Roofing. The Composites segment manufactures, fabricates, and sells glass reinforcements in the form of fiber; and glass fiber products in the form of fabrics, non-wovens, and other specialized products. 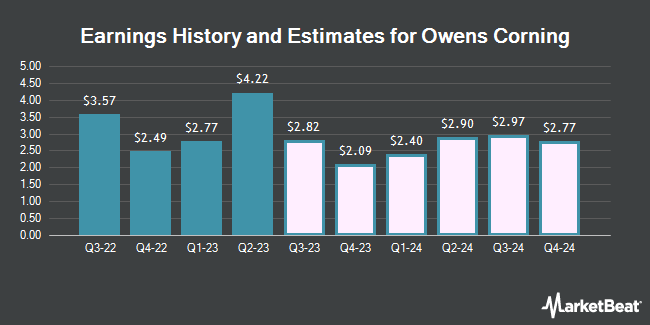 Complete the form below to receive the latest headlines and analysts' recommendations for Owens Corning with our free daily email newsletter: