Oregon Public Employees Retirement Fund boosted its position in Spectrum Pharmaceuticals, Inc. (NASDAQ:SPPI) by 29.7% during the third quarter, according to the company in its most recent 13F filing with the SEC. The fund owned 58,934 shares of the biotechnology company’s stock after buying an additional 13,500 shares during the quarter. Oregon Public Employees Retirement Fund’s holdings in Spectrum Pharmaceuticals were worth $240,000 as of its most recent filing with the SEC.

In other Spectrum Pharmaceuticals news, CEO Joseph W. Turgeon sold 162,473 shares of the company’s stock in a transaction that occurred on Wednesday, November 18th. The shares were sold at an average price of $4.13, for a total value of $671,013.49. Following the completion of the transaction, the chief executive officer now directly owns 528,661 shares in the company, valued at approximately $2,183,369.93. The sale was disclosed in a filing with the SEC, which is available at this hyperlink. Insiders have sold a total of 174,498 shares of company stock worth $713,401 over the last three months. Insiders own 5.04% of the company’s stock.

Spectrum Pharmaceuticals, Inc, a biopharma company, develops and commercializes oncology and hematology drug products. The company is developing ROLONTIS, a novel long-acting granulocyte colony-stimulating for chemotherapy-induced neutropenia; Poziotinib, a novel irreversible tyrosine kinase inhibitor for non-small cell lung cancer tumors with various mutations; and Anti-CD20-IFNÃ¡, an antibody-interferon fusion molecule directed against CD20 that is in Phase I development for the treatment of relapsed or refractory non-Hodgkin's lymphoma patients, including diffuse large B-cell lymphoma. 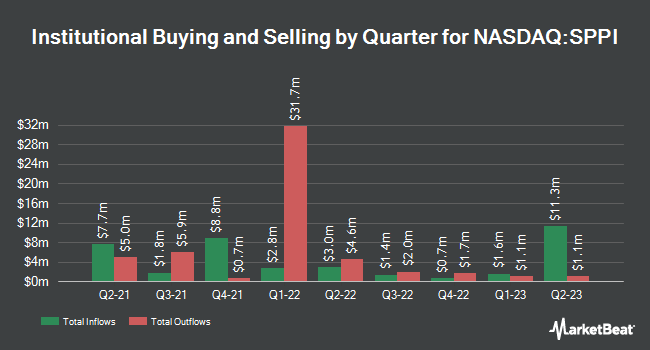