On average, analysts expect that Occidental Petroleum will report full year sales of $20.39 billion for the current fiscal year, with estimates ranging from $18.20 billion to $21.76 billion. For the next fiscal year, analysts forecast that the firm will report sales of $20.29 billion, with estimates ranging from $18.44 billion to $21.90 billion. Zacks’ sales calculations are an average based on a survey of research analysts that that provide coverage for Occidental Petroleum.

Occidental Petroleum (NYSE:OXY) last released its earnings results on Sunday, February 21st. The oil and gas producer reported ($0.78) earnings per share for the quarter, missing the Thomson Reuters’ consensus estimate of ($0.59) by ($0.19). Occidental Petroleum had a negative net margin of 76.17% and a negative return on equity of 15.55%. The business had revenue of $3.35 billion for the quarter, compared to analysts’ expectations of $4.47 billion. During the same period last year, the firm earned ($0.30) EPS.

The company also recently disclosed a quarterly dividend, which was paid on Thursday, April 15th. Stockholders of record on Wednesday, March 10th were given a dividend of $0.01 per share. This represents a $0.04 dividend on an annualized basis and a dividend yield of 0.15%. The ex-dividend date was Tuesday, March 9th. Occidental Petroleum’s dividend payout ratio is presently 2.76%.

Occidental Petroleum Corporation, together with its subsidiaries, engages in the acquisition, exploration, and development of oil and gas properties in the United States, the Middle East, Africa, and Latin America. The company operates through three segments: Oil and Gas, Chemical, and Marketing and Midstream.

Further Reading: What is a capital gain? 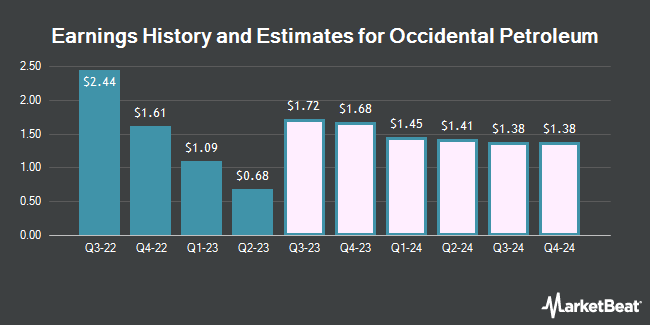 The Procter & Gamble Company Position Increased by 55I LLC

Complete the form below to receive the latest headlines and analysts' recommendations for Occidental Petroleum with our free daily email newsletter: