Nuveen Asset Management LLC trimmed its position in shares of Sientra Inc (NASDAQ:SIEN) by 58.9% during the second quarter, according to its most recent disclosure with the Securities and Exchange Commission. The institutional investor owned 174,970 shares of the medical instruments supplier’s stock after selling 250,693 shares during the quarter. Nuveen Asset Management LLC owned approximately 0.35% of Sientra worth $678,000 as of its most recent SEC filing.

Sientra (NASDAQ:SIEN) last released its quarterly earnings data on Monday, August 10th. The medical instruments supplier reported ($0.68) EPS for the quarter, missing the Thomson Reuters’ consensus estimate of ($0.45) by ($0.23). The firm had revenue of $12.45 million for the quarter, compared to the consensus estimate of $8.87 million. Sientra had a negative net margin of 140.76% and a negative return on equity of 130.33%. On average, equities research analysts anticipate that Sientra Inc will post -1.6 earnings per share for the current year.

Read More: Bear Market – How and Why They Occur

Want to see what other hedge funds are holding SIEN? Visit HoldingsChannel.com to get the latest 13F filings and insider trades for Sientra Inc (NASDAQ:SIEN). 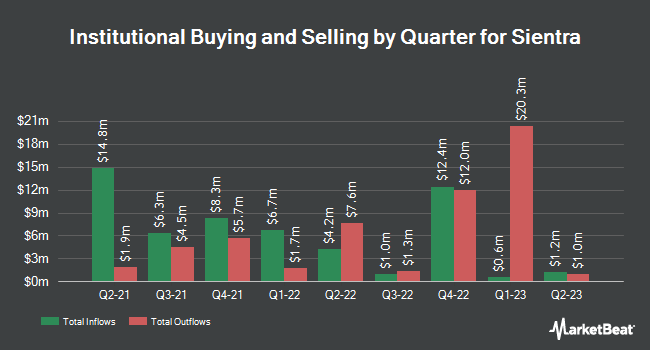 Receive News & Ratings for Sientra Daily - Enter your email address below to receive a concise daily summary of the latest news and analysts' ratings for Sientra and related companies with MarketBeat.com's FREE daily email newsletter.

$1.52 Earnings Per Share Expected for Skyworks Solutions, Inc. This Quarter