Micron Technology, Inc. (NASDAQ:MU) SVP Joel L. Poppen sold 4,985 shares of Micron Technology stock in a transaction that occurred on Monday, January 11th. The shares were sold at an average price of $78.66, for a total transaction of $392,120.10. Following the completion of the sale, the senior vice president now owns 301,918 shares of the company’s stock, valued at approximately $23,748,869.88. The transaction was disclosed in a document filed with the SEC, which is accessible through this hyperlink.

Micron Technology (NASDAQ:MU) last posted its quarterly earnings data on Wednesday, January 6th. The semiconductor manufacturer reported $0.78 EPS for the quarter, beating analysts’ consensus estimates of $0.71 by $0.07. Micron Technology had a net margin of 12.54% and a return on equity of 7.73%. The company had revenue of $5.77 billion for the quarter, compared to analyst estimates of $5.66 billion. During the same period in the previous year, the business posted $0.48 earnings per share. Micron Technology’s quarterly revenue was up 12.2% on a year-over-year basis. Research analysts predict that Micron Technology, Inc. will post 3.12 earnings per share for the current year.

Recommended Story: How are institutional investors different from individual investors? 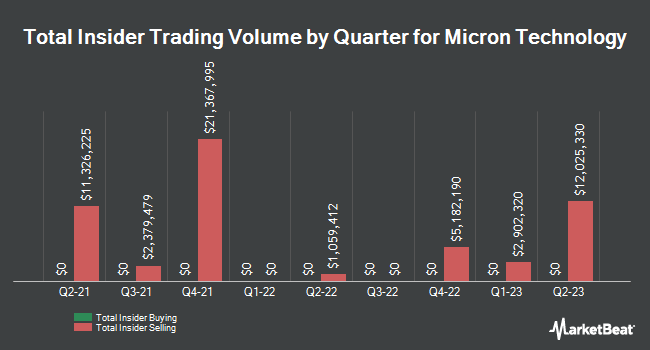 The Weir Group PLC Price Target Increased to GBX 2,350 by Analysts at Barclays

Complete the form below to receive the latest headlines and analysts' recommendations for Micron Technology with our free daily email newsletter: