Shares of Mersana Therapeutics, Inc. (NASDAQ:MRSN) have earned an average rating of “Buy” from the eight research firms that are currently covering the firm, MarketBeat Ratings reports. One equities research analyst has rated the stock with a sell recommendation, two have given a hold recommendation and five have assigned a buy recommendation to the company. The average 1 year target price among brokerages that have updated their coverage on the stock in the last year is $26.17.

In other Mersana Therapeutics news, insider Timothy B. Lowinger sold 8,203 shares of the business’s stock in a transaction that occurred on Wednesday, January 20th. The stock was sold at an average price of $21.54, for a total transaction of $176,692.62. Following the transaction, the insider now owns 33,318 shares in the company, valued at approximately $717,669.72. The transaction was disclosed in a legal filing with the Securities & Exchange Commission, which is accessible through the SEC website. Insiders have sold a total of 16,951 shares of company stock worth $331,843 in the last quarter. 5.30% of the stock is currently owned by insiders.

Featured Story: What does cost of debt say about a company’s financial health? 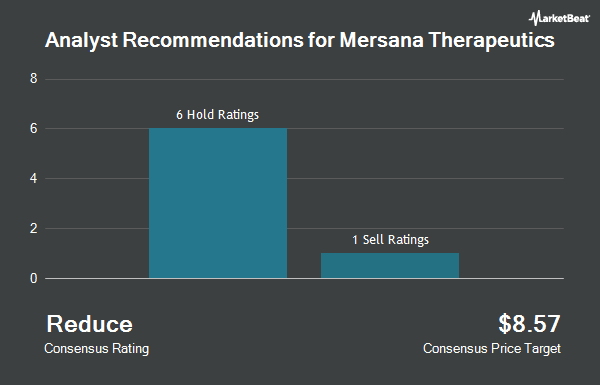 Complete the form below to receive the latest headlines and analysts' recommendations for Mersana Therapeutics with our free daily email newsletter: