Mackay Shields LLC reduced its stake in Talos Energy Inc. (NYSE:TALO) by 0.6% during the second quarter, according to the company in its most recent disclosure with the Securities and Exchange Commission (SEC). The firm owned 3,388,354 shares of the company’s stock after selling 18,813 shares during the quarter. Mackay Shields LLC owned about 4.14% of Talos Energy worth $52,994,000 at the end of the most recent reporting period.

In other Talos Energy news, major shareholder Apollo Management Holdings Gp, sold 66,493 shares of the business’s stock in a transaction that occurred on Monday, September 27th. The stock was sold at an average price of $14.12, for a total value of $938,881.16. The sale was disclosed in a filing with the Securities & Exchange Commission, which is accessible through this hyperlink. Insiders own 0.25% of the company’s stock.

Talos Energy (NYSE:TALO) last issued its quarterly earnings results on Tuesday, August 3rd. The company reported ($0.05) earnings per share (EPS) for the quarter, missing the Zacks’ consensus estimate of $0.05 by ($0.10). The business had revenue of $303.77 million for the quarter, compared to the consensus estimate of $257.94 million. Talos Energy had a negative net margin of 82.72% and a negative return on equity of 10.97%. As a group, analysts expect that Talos Energy Inc. will post 0.16 earnings per share for the current fiscal year.

Talos Energy, Inc operates as a holding company. The firm engages in the exploration and production of oil and natural gas. It focuses on the exploration, acquisition, exploitation and development of shallow and deepwater assets near existing infrastructure in the United State Gulf of Mexico. The company was founded by John A.

Featured Article: What factors cause inflation to rise?

Want to see what other hedge funds are holding TALO? Visit HoldingsChannel.com to get the latest 13F filings and insider trades for Talos Energy Inc. (NYSE:TALO). 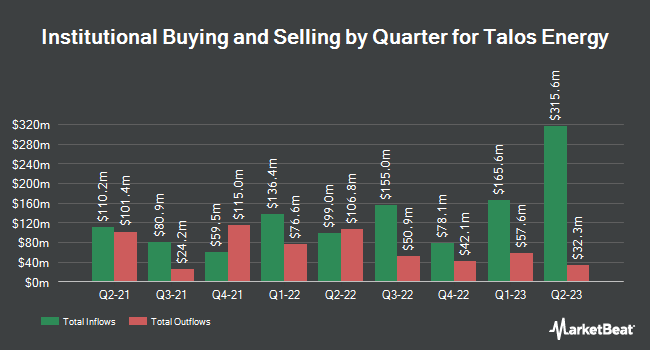 $0.26 Earnings Per Share Expected for U.S. Century Bank This Quarter

Complete the form below to receive the latest headlines and analysts' recommendations for Talos Energy with our free daily email newsletter: