M.D.C. Holdings, Inc. (NYSE:MDC) CEO Larry A. Mizel sold 110,224 shares of the business’s stock in a transaction dated Wednesday, July 29th. The shares were sold at an average price of $44.82, for a total transaction of $4,940,239.68. Following the completion of the transaction, the chief executive officer now directly owns 230,849 shares of the company’s stock, valued at approximately $10,346,652.18. The sale was disclosed in a legal filing with the SEC, which is available at this hyperlink.

M.D.C. (NYSE:MDC) last released its earnings results on Tuesday, July 28th. The construction company reported $1.31 EPS for the quarter, beating the Thomson Reuters’ consensus estimate of $0.83 by $0.48. The company had revenue of $886.80 million during the quarter, compared to analysts’ expectations of $806.74 million. M.D.C. had a return on equity of 14.75% and a net margin of 7.52%. The business’s revenue was up 21.0% on a year-over-year basis. During the same period in the prior year, the business posted $0.86 EPS. Sell-side analysts anticipate that M.D.C. Holdings, Inc. will post 2.98 EPS for the current fiscal year.

M.DC Holdings, Inc, through its subsidiaries, engages in the homebuilding and financial service businesses. Its homebuilding operations include purchasing finished lots or developing lots for the construction and sale primarily of single-family detached homes to first-time and first-time move-up homebuyers under the Richmond American Homes name. 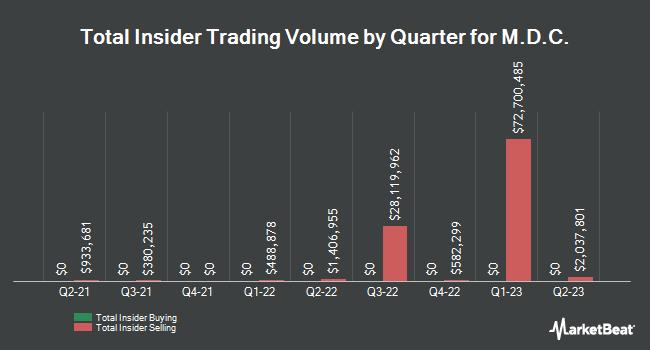 Receive News & Ratings for M.D.C. Daily - Enter your email address below to receive a concise daily summary of the latest news and analysts' ratings for M.D.C. and related companies with MarketBeat.com's FREE daily email newsletter.

Siemens Healthineers Given a €40.00 Price Target at Barclays

Uniper Given a €31.50 Price Target by Deutsche Bank Analysts