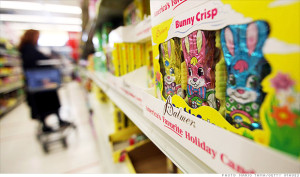 Retailers posted sales that were sharply higher during April as warmer weather and a late Easter helped push more shoppers into stores.

The results released on Thursday marked a second straight month that sales at same stores topped expectations. Sales from same stores are an industry figure that gauges the sales at stores that have been opened a minimum of 13 months.

Gap Inc reported an increase of 9% in its sales at same stories for April, well above the expected growth of 0.1% of analysts.

Results were helped by the 18% jump in sales of the Old Navy brand. The brand benefited from a late Easter weekend. Analysts were expecting that Old Navy would have growth of just 1.4%.

One of the other Gap segments, Banana Republic saw sales up by 7% in comparison to analyst’s estimates of a decline of 0.5%. The Gap namesake chain was up by 3% when it was expected to have an increase of just 1.5%. Gap issued as well, an outlook for quarterly profits that was ahead of estimates.

Due to the shifting Easter weekend, one analyst said that May could likely give the first real clear reading for retail trends.

Several industry insiders forecasted a spring shopping pickup amidst a demand that was pent up following severe winter weather.

Results from the months of March and April generally are viewed together due to Easter shifting each year, which this year was nearly three months later than last year and moved to April when last year it was in March.

Consumers continued spending on items that were big-ticket in April, as buyers of cars shrugged off worries of a tepid economy and entered auto dealerships in droves in the U.S. helping the majority of carmakers post higher sales for new vehicles.

Analysts had expected retail sales to increase by 2.8%, when they reached 6%.

For the period of two months between March and April, retailers reported growth of 4.1% compared to last year at 3.5%.

Many of the U.S. retailers, including the country’s major department stores as well as big box stores, stopped reporting data on monthly sales some amount of time ago. Many retailers will release results for the quarter during the next couple of weeks.