Jobless Claims Near Low of 15 Years 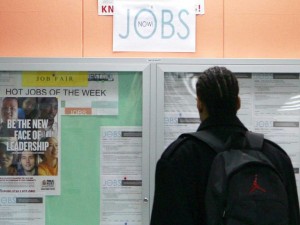 The number of people in the U.S. filing new claims for benefits for unemployment rose last week marginally, but stayed close to a low of 15-years in a sign the labor market continues to get stronger despite only moderate growth in the economy.

Initial claims for benefits of state unemployment were up 3,000 to 265,000 for the week that ended May 2, said the Labor Department on Thursday.

Claims for the week prior to that were unrevised and stayed at 262,000, which was their lowest since April of 2000. Claims have been under 300,000 for the past nine weeks. That particular threshold is associated most of the time with a labor market that is strengthening.

Economists polled forecasted that claims would rise to 280,000. The four-week average of claims, which is considered a much better measure of trends in the labor market as it can iron out the volatility of changes week to week, was down last week by 4,250 to 279,450, which is the lowest it has been since May of 2000.

The dollar was up against the euro on this new data, while U.S. Treasury debt trimmed gains. The data has no bearing on the employment report due on Friday for the month of April as it falls outside that survey period.

However, the lower trend in unemployment trends give some optimism that payrolls were able to rebound during April, despite a Wednesday ADP report that showed private employers last month had hired the fewest number of workers in over a year.

According to a survey of economists, payrolls increased by 224,000 for April, after gaining just 126,000 during March, when bad weather held back hiring.

April’s report on employment could give new clues as to the strength of the recovery of the economy after the cold weather, strong dollar, port problems and deep cuts in spending by energy companies brought growth during the first quarter to a crawl.

Thus far, data for April on sales of autos and manufacturing suggests moderate momentum for the economy at the beginning of the second quarter.