Century Bancorp, Inc. (NASDAQ:CNBKA) major shareholder James J. Filler bought 1,130 shares of Century Bancorp stock in a transaction dated Wednesday, April 7th. The stock was purchased at an average price of $92.71 per share, with a total value of $104,762.30. Following the completion of the purchase, the insider now owns 868,759 shares in the company, valued at $80,542,646.89. The purchase was disclosed in a filing with the SEC, which is available at this link. Large shareholders that own at least 10% of a company’s stock are required to disclose their sales and purchases with the SEC.

Century Bancorp (NASDAQ:CNBKA) last released its quarterly earnings results on Tuesday, January 19th. The bank reported $2.08 earnings per share (EPS) for the quarter. The business had revenue of $35.06 million during the quarter. Century Bancorp had a return on equity of 11.91% and a net margin of 24.30%. 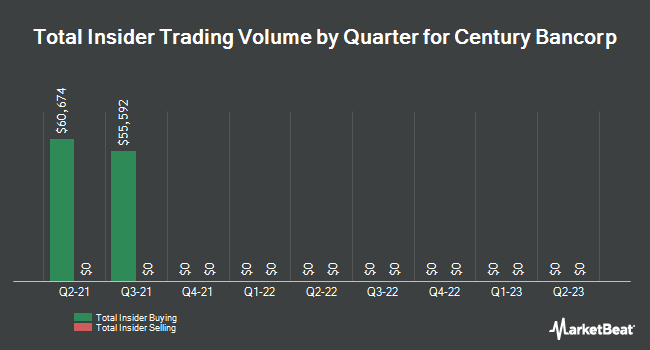 Complete the form below to receive the latest headlines and analysts' recommendations for Century Bancorp with our free daily email newsletter: