January 24th, 2020 - Comments Off on IQIYI (NASDAQ:IQ) Lifted to “Buy” at HSBC - Filed Under - by Kyle Jackson
Filed Under: Analyst Articles - US - Investing
Tweet

HSBC upgraded shares of IQIYI (NASDAQ:IQ) from a hold rating to a buy rating in a report published on Tuesday morning, Briefing.com Automated Import reports. HSBC currently has $29.00 price objective on the stock.

IQIYI (NASDAQ:IQ) last announced its quarterly earnings results on Wednesday, November 6th. The company reported ($5.04) earnings per share (EPS) for the quarter, missing the consensus estimate of ($0.74) by ($4.30). IQIYI had a negative net margin of 39.47% and a negative return on equity of 72.51%. The business had revenue of $7.40 billion for the quarter, compared to analyst estimates of $7.23 billion. During the same period in the prior year, the business earned ($0.62) EPS. The company’s revenue for the quarter was up 7.0% compared to the same quarter last year. On average, research analysts anticipate that IQIYI will post -2.06 earnings per share for the current fiscal year. 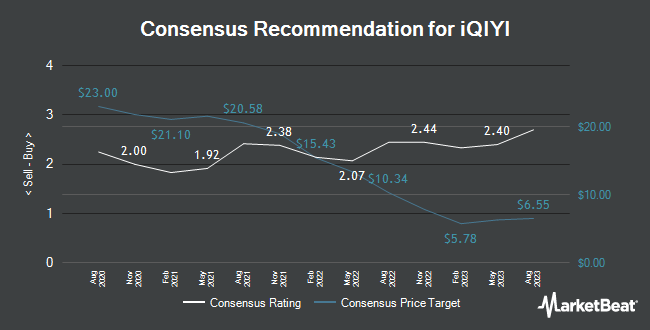 Receive News & Ratings for IQIYI Daily - Enter your email address below to receive a concise daily summary of the latest news and analysts' ratings for IQIYI and related companies with MarketBeat.com's FREE daily email newsletter.

BHPCoin Price Up 2.4% Over Last Week