Analysts expect Inogen, Inc. (NASDAQ:INGN) to report $76.20 million in sales for the current quarter, Zacks Investment Research reports. Two analysts have provided estimates for Inogen’s earnings, with the highest sales estimate coming in at $76.40 million and the lowest estimate coming in at $76.00 million. Inogen posted sales of $73.98 million in the same quarter last year, which would indicate a positive year-over-year growth rate of 3%. The company is expected to report its next quarterly earnings results on Wednesday, February 23rd.

Inogen (NASDAQ:INGN) last announced its earnings results on Thursday, November 4th. The medical technology company reported $0.53 earnings per share (EPS) for the quarter, topping the Zacks’ consensus estimate of ($0.29) by $0.82. Inogen had a net margin of 3.21% and a return on equity of 3.11%. The firm had revenue of $93.11 million for the quarter, compared to analyst estimates of $86.69 million. During the same quarter in the prior year, the business posted ($0.08) EPS. The business’s revenue was up 25.3% compared to the same quarter last year.

Recommended Story: What is the Dividend Aristocrat Index? 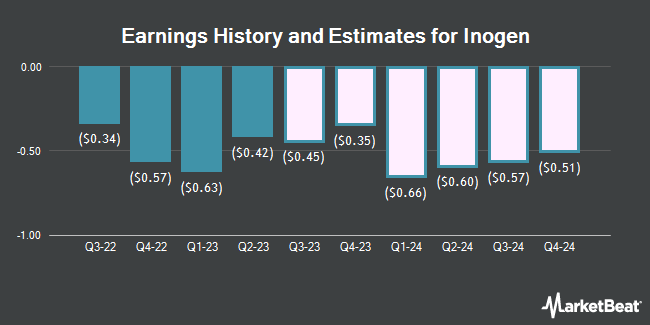 Receive News & Ratings for Inogen Daily - Enter your email address below to receive a concise daily summary of the latest news and analysts' ratings for Inogen and related companies with MarketBeat.com's FREE daily email newsletter.

Complete the form below to receive the latest headlines and analysts' recommendations for Inogen with our free daily email newsletter: