Greg Penner Takes Over as Walmart Chairman of the Board 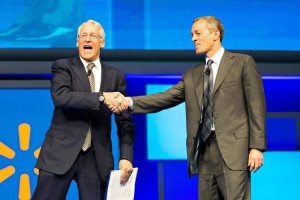 At Walmart, an era ended this week, when founder Sam Walton’s son Rob Walton stepped down from his position as board chairman of the retailer turning that position over to son in law Greg Penner. The change was announced during the annual meeting of the company.

Though the move’s timing was a bit unexpected, Penner, who has been the vice chairman, has been widely seen as the successor to Rob Walton.

The Walton family has 50% ownership in the business and this move keeps the control in family hands.

Rob Walton, who is 70, served as the chairman of the board the past 23 years. Penner, who is 45, is married to Carrie, the daughter of Rob Walton. He has worked at the company for the past 15 years on and off.

Penner started at Goldman Sachs and at one time ran its business in Japan.

After its annual meeting was opened, Reese Witherspoon the host introduced Rob Walton. He came on stage wearing a trucker’s hat that was his late fathers’.

Walton talked about the business, success and history then introduced members of the family who were sitting up front.

He introduced family members including his wife, sister, brother, his children, nephews, nieces and others.

Then he called on Penner and surprised the entire crowd by announcing he was stepping down and Penner would replace him.

Current Walmart CEO Doug McMillon also spoke about Rob Walton, who was looked at as a steady force behind the scenes, overseeing the stake of his family worth an estimated $120 billion.

Though the company has expanded during the tenure of Rob Walton, it has been hit by scandals, investigations and protests about low wages.

Its stock has been underperforming, so Penner will not have it easy going forward as the largest company in the world with annual sales of $482 billion.

There was some smattering of upset participants present but the overwhelming majority was supportive of the change and of the company itself.