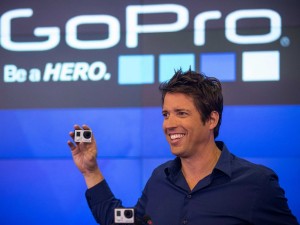 CEO and co-founder of GoPro Inc, Nick Woodman is set to become North America’s highest paid executive. The former surfer now entrepreneur was given restricted stock units from by GoPro that were worth $284 million at the start of 2015.

This made the CEO who is 39, the No. 1 paid American Executive. The executives are listed on the Bloomberg Pay Index per their total compensation package.

However, Woodman has not yet received all the stock units granted him. He received the shares on paper at the start of 2014. GoPro will pay those shares in installments monthly over a one-year period.

GoPro debuted in its initial public offering in June of 2014 and gained attention from investors right away. The company raised close to $425 million through the IPO, and its stock then was $24 per share, but the price of the stock went up quickly and nearly reached triple digits prior to sliding.

The majority of the money of Woodman’s is secured with shares from the company. He received 4.5 million shares only a few weeks prior to the company announcing its IPO.

The restricted stock units or RSUs are a type of compensation that employees cannot sell until a set of conditions have been met. However, these are not the same as options, as there is not set price they can be exercised at.

Stock value at GoPro fluctuated a lot therefore, it is difficult to determine the exact fortune of Woodman.

One analyst said that nobody is likely worth that much except maybe Steve Jobs in his day. He added that the stock awarded the CEO at GoPro was awarded in a way that compensated him for his efforts in the company.

Woodman moving forward will see his wealth increase even more as the GoPro stock price increases since he has a very large stake in the company.