State of Alaska Department of Revenue trimmed its position in Glaukos Co. (NYSE:GKOS) by 16.3% in the fourth quarter, according to its most recent disclosure with the SEC. The institutional investor owned 34,990 shares of the medical instruments supplier’s stock after selling 6,800 shares during the period. State of Alaska Department of Revenue owned 0.08% of Glaukos worth $2,633,000 at the end of the most recent reporting period.

Glaukos (NYSE:GKOS) last released its earnings results on Thursday, November 5th. The medical instruments supplier reported ($0.09) earnings per share (EPS) for the quarter, topping analysts’ consensus estimates of ($0.46) by $0.37. Glaukos had a negative return on equity of 7.99% and a negative net margin of 33.61%. The firm had revenue of $64.83 million for the quarter, compared to analyst estimates of $53.74 million. During the same period in the previous year, the company earned ($0.10) earnings per share. Glaukos’s revenue was up 10.8% compared to the same quarter last year. Sell-side analysts expect that Glaukos Co. will post -1.49 EPS for the current year.

In related news, Director William J. Phd Link sold 50,000 shares of the stock in a transaction on Tuesday, December 1st. The stock was sold at an average price of $67.97, for a total value of $3,398,500.00. The transaction was disclosed in a document filed with the Securities & Exchange Commission, which is available at the SEC website. Company insiders own 10.20% of the company’s stock. 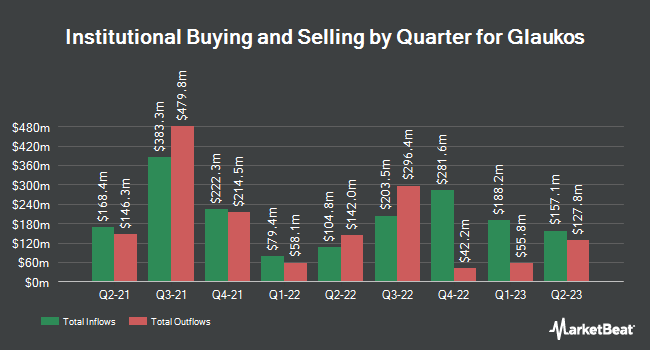 Receive News & Ratings for Glaukos Daily - Enter your email address below to receive a concise daily summary of the latest news and analysts' ratings for Glaukos and related companies with MarketBeat.com's FREE daily email newsletter.

Complete the form below to receive the latest headlines and analysts' recommendations for Glaukos with our free daily email newsletter: