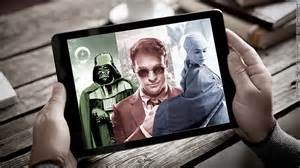 This weekend fanatics for Daredevil the new Marvel series on Netflix, Game of Thrones and Star Wars will all be able to be watched on smartphones, as three of the biggest franchises in pop culture have expanded their brands to another digital frontier.

As of Friday, Disney along with 20th Century Fox released the six popular Star Wars movies for download digitally, which is the first time the famous space saga became available digitally.

In addition, Netflix on Friday started its deal featuring many series with Marvel by premiering Daredevil exclusively on the video streaming service.

On Sunday, Game of Thrones from HBO will return for a fifth season. The hugely popular fantasy series will likely reach more viewers during this season because it can be accessed through HBO without any cable subscription thanks to HBO NOW, which made its debut this week as well.

An Executive Vice President of Marketing at HBO said that Game of Thrones was the biggest ever show for HBO so it was logical to time its launch for a new season with the new launch of HBO NOW.

The opportunity to be able to offer other platforms along with new technology as a method of giving more people access to our Game of Thrones was just a natural decision, added the marketing VP.

The HBO series was watched last season by over 19.1 million viewers in the U.S. per episode, across every platform available including HBO GO. Now with the launch of HBO NOW, the popular series will add an additional platform for its audience to view it on.

The audience of the hit series is very passionate said the HBO VP and now they have another platform to watch the series on if they were not able to view it before. That is great for fans as well as being great for the series.

For the Star Wars saga, this will be one weekend its fans will long remember. They can now enjoy their space saga on any device available to them.