Virco Mfg. Co. (NASDAQ:VIRC) – Equities researchers at Wedbush decreased their FY2022 EPS estimates for shares of Virco Mfg. in a research report issued to clients and investors on Wednesday, September 15th. Wedbush analyst J. Mccanless now anticipates that the company will earn $0.07 per share for the year, down from their prior estimate of $0.08.

Virco Mfg. (NASDAQ:VIRC) last released its quarterly earnings results on Monday, September 13th. The company reported $0.24 EPS for the quarter, missing the Zacks’ consensus estimate of $0.30 by ($0.06). Virco Mfg. had a negative return on equity of 2.63% and a negative net margin of 0.89%. The business had revenue of $59.02 million for the quarter, compared to analyst estimates of $72.30 million.

Virco Manufacturing Corp. engages in the design, production and distribution of furniture. Its products include mobile tables, mobile storage equipment, desks, computer furniture, chairs, folding chairs and folding tables. The company was founded in February 1950 and is headquartered in Torrance, CA. 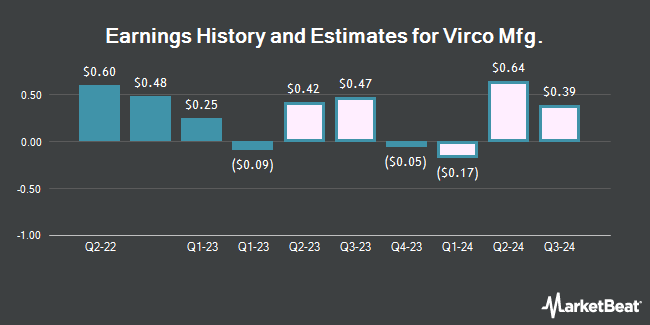 Complete the form below to receive the latest headlines and analysts' recommendations for Virco Mfg. with our free daily email newsletter: