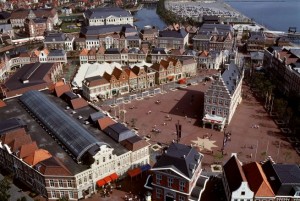 In Nagasaki, Japan a hotel has looked to the future and that involves C-3PO turning down the bed. At least, that is the Henn-na Hotel’s goal starting in July. The hotel, with 72 rooms will have a staff that includes 10 robots that are capable of welcoming guests, cleaning rooms and carrying luggage.

The technology for the cyborg staff at the hotel is not too far from real science fiction. The robots are from Kokoro a robotic company, which has developed actroid or human like robots for the past 12 years.

The Kokoro robots are modeled generally on the mannerism and appearance of young women in Japan. They are able to mimic behaviors of humans like blinking, breathing, speaking fluent Chinese, Japanese, Korean and even English. They can make eye contact as well as respond to body tone and language.

For those who are seeking relief from change and strangeness the robo-receptionists and the maids and bellhops will be supplemented with human staff.

However, the president of the company said that he hopes to soon have robots that perform 90% of the services at the hotel.

The building will be high tech as well. Guests will enter their rooms through facial recognition software instead of key cards and the temperatures of the rooms will be monitored through a radiation panel that detects body heat.

Instead of calling reception, hotel guests that need additional amenities can request them through a tablet provided by the hotel.

The hotel is to be located inside a historical theme park, which is modeled after a Dutch settlement in the 17th century.

The project is the first hotel in Japan that is robot-run but joins a number of other businesses that are android oriented in the country.

A bank in Tokyo introduced this week Nao an automated 23-inch high robot that can speak 19 languages and assists clients using the ATM.

After taking out cash form a robot teller, resident in Tokyo can watch a robot cabaret or have their hair styled by a robot.