Freeport-McMoRan (NYSE:FCX – Get Rating) had its target price lowered by equities researchers at Morgan Stanley from $39.00 to $30.00 in a research report issued to clients and investors on Wednesday, The Fly reports. The firm presently has an “equal weight” rating on the natural resource company’s stock. Morgan Stanley’s price objective points to a potential upside of 1.45% from the stock’s previous close.

Freeport-McMoRan (NYSE:FCX – Get Rating) last issued its quarterly earnings data on Thursday, April 21st. The natural resource company reported $1.07 EPS for the quarter, topping analysts’ consensus estimates of $0.88 by $0.19. The company had revenue of $6.60 billion during the quarter, compared to the consensus estimate of $6.29 billion. Freeport-McMoRan had a net margin of 20.79% and a return on equity of 24.06%. Freeport-McMoRan’s revenue for the quarter was up 36.1% compared to the same quarter last year. During the same quarter in the previous year, the firm posted $0.51 earnings per share. As a group, research analysts predict that Freeport-McMoRan will post 3.92 earnings per share for the current fiscal year.

In other Freeport-McMoRan news, Director Dustan E. Mccoy sold 8,200 shares of Freeport-McMoRan stock in a transaction that occurred on Tuesday, May 31st. The stock was sold at an average price of $39.24, for a total value of $321,768.00. Following the transaction, the director now directly owns 134,400 shares of the company’s stock, valued at approximately $5,273,856. The sale was disclosed in a legal filing with the Securities & Exchange Commission, which is available through the SEC website. Also, Director Hugh Grant acquired 12,300 shares of the business’s stock in a transaction on Monday, April 25th. The shares were purchased at an average cost of $40.75 per share, for a total transaction of $501,225.00. Following the completion of the transaction, the director now owns 15,776 shares in the company, valued at approximately $642,872. The disclosure for this purchase can be found here. Company insiders own 0.72% of the company’s stock.

About Freeport-McMoRan (Get Rating) 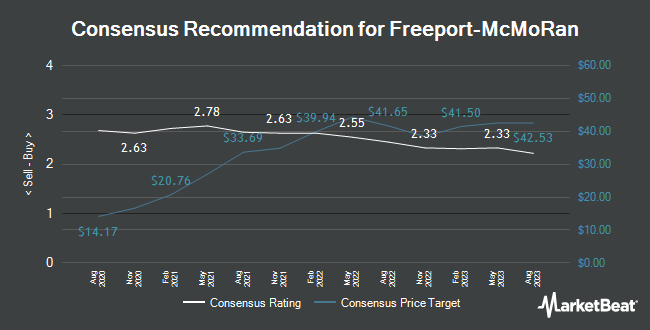