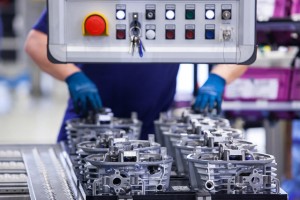 Factory orders in Germany took a nosedive during August, signaling that the remainder of the year could feature less that strong economic output and it could even stagnate, said experts.

The index fell more than 5.7% in adjusted monthly terms, said the economy ministry in Germany. This was far below the decline of 2.4% that analysts had expected. July figures were also revised just upward to reflect a 4.9% increase, versus the gain of 4.6% originally reported last month.

The fall was the sharpest in over five years, which was during the middle of the global economic crisis.

Economists said the news for orders supports the expectation that the economy in Germany will develop weakly during the second six months of this year.

They said the economic output in Germany would be flat during the third quarter, due to weak trends in the number of orders, and analysts said they are not expecting much during the final quarter.

This would follow an annualized decline of 0.6% in German output during the second quarter.

Weakness in orders was felt across the majority of categories. Foreign orders declined by 8.4% during the month, while orders domestically dropped 2%.

The key category capital goods recorded a drop of 8.5%, which came after an increase of 9.4% in July.

A bright note was that orders for German consumer goods were up 3.7%, rebounding following the decline in July of 3.5%.

Some analysts viewed that number as another sign that the economy recovery for both Germany and the eurozone did not necessarily run empty.

In Germany, said one economist, positive rates of growth are expected during the second six months of 2014, even if it is only moderate.

Some experts said the decline in orders pointed to weakness in Germany’s domestic economy, instead of in exports. During the first two months of the just ended third quarter, foreign orders increased 0.6%, while on the domestic side they were down 1.4%, versus the average during the second quarter.