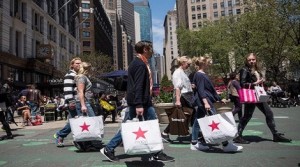 The economy in the United State slowed during the last three months of 2014. However, a burst of spending by consumers and the prospect of a continuation of low energy prices has bolstered confidence that economic growth will be stronger this year.

The economy, measured through the gross domestic product, expanded at a rate of 2.6% during the period of October through the end of December, said the government on Friday. That dropped from its gain of 5% during the previous quarter.

Although government spending, trade and business investment weakened, consumers showed rising confidence by increasing their spending at the most accelerated rate in close to nine years.

Thanks to continued job growth, falling oil prices and signals that pay could finally be increasing, Americans are poised to maintain the economy expanding at a strong pace. On Friday, a report by the University of Michigan reported sentiment by U.S. consumers as being the highest since January of 2004.

In addition, the government said benefits and wages are moving upward, a sign that steady gains in jobs might be compelling businesses to pay higher wages,

An index, which measures benefits and pay, increased 2.2% during 2014, which was slightly up from an increase of 2% during 2013 and ahead the rate of inflation that sat at 1.3%.

Though the GDP figure overall for the last quarter of 2014 was underwhelming, many components of the report were in line with an economy that is outpacing others across the globe and on course to post a solid growth during 2015.

Overall for 2014, the economy expanded by 2.4%. The year started slowly due to a brutal period of winter that sent the economy backwards. The GDP fell by 2.1% on an annualized basis during the first three months, but rebounded strongly averaging 4.1% over the following three quarters.

Many industry analysts expect growth in 2015 above 3%. That would mark significant acceleration after an extended period of being weak.

Since 2009 when the recession ended, the expansion of the economy has averaged 2.2% annually, which is below the typical increases following a deep recession.