IronNet, Inc. (NYSE:IRNT – Get Rating) insider Donald Closser sold 9,288 shares of the firm’s stock in a transaction on Wednesday, August 3rd. The shares were sold at an average price of $2.37, for a total transaction of $22,012.56. Following the transaction, the insider now directly owns 948,681 shares of the company’s stock, valued at approximately $2,248,373.97. The transaction was disclosed in a document filed with the Securities & Exchange Commission, which is accessible through this hyperlink.

IronNet (NYSE:IRNT – Get Rating) last posted its quarterly earnings data on Tuesday, June 14th. The company reported ($0.33) earnings per share for the quarter, missing the consensus estimate of ($0.20) by ($0.13). The firm had revenue of $6.69 million for the quarter, compared to the consensus estimate of $7.05 million. As a group, analysts forecast that IronNet, Inc. will post -0.94 EPS for the current year.

Separately, Jefferies Financial Group decreased their price objective on shares of IronNet from $3.25 to $2.75 in a research report on Monday, May 23rd.

Institutional Investors Weigh In On IronNet

IronNet, Inc designs and develops solutions for cyber-attacks. The company offers IronDefense, an advanced network detection and response solution that provides behavior-based and AI-driven analytics at the network level to detect anomalous activity at individual enterprises and prioritize the threats in its network; and IronDome, a threat-exchange solution that enables collective defense member enterprises to actively exchange individual anonymized cyber anomalies at machine speed in a community of public-private peers. 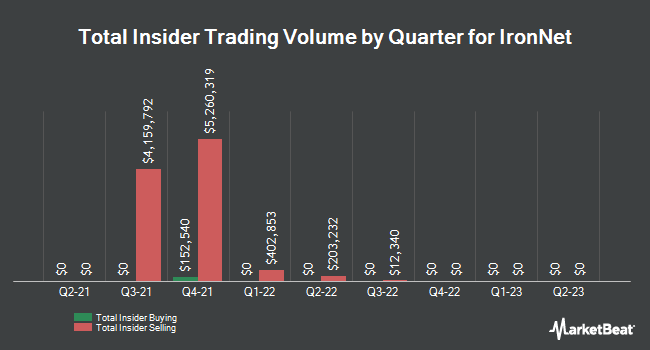 Receive News & Ratings for IronNet Daily - Enter your email address below to receive a concise daily summary of the latest news and analysts' ratings for IronNet and related companies with MarketBeat.com's FREE daily email newsletter.

Complete the form below to receive the latest headlines and analysts' recommendations for IronNet with our free daily email newsletter: