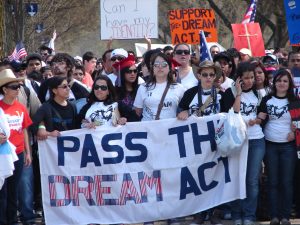 A new voter registration drive by Hillary Clinton’s presidential campaign is enlisting undocumented “Dreamers” to reach the Latino community. The new national voter registration program, called “Mi Sueño, Tu Voto/My Dream, Your Vote,” was announced Sunday. Hillary for America will be holding events across the country this week to unveil the program.

Though the 730,000 young people known as Dreamers themselves cannot legally vote, they remain a powerful political organizing force that could convince Latino and other households to vote for the Democratic nominee and help sign up sympathetic voters. Latinos and other immigrants make up an important part of the voting base in battleground states like Colorado, Nevada, North Carolina, and Florida. A record 27.3 million Latinos are eligible to vote in 2016.

The 2012 Deferred Action for Childhood Arrivals’ (DACA) order temporarily shielded some young immigrants brought to the country illegally as children from deportation and allowed them to work in the U.S. legally. The initiative offered temporary exemptions from deportation to those who entered the country before age 16 and are either in school or high school graduates and still young adults.

A bill to grant them legal status, known as the Dream Act, has been introduced in Congress several times but has failed to pass. Obama’s efforts to give legal status to some of the 11 million immigrants living in the U.S. illegally was effectively killed by the Supreme Court in June.

Illegal immigration has become a flash point in the presidential race. Revamping the country’s immigration system is a key plank of Clinton’s presidential campaign. She has vowed to restore and expand Obama’s programs and “take a very hard look at the deportation policies.”

Republican candidate Donald Trump has spouted immigration rhetoric that has sparked outrage and fear within the Latino community. Trump’s immigration plans would end the Dreamer program and could result in the deportation of the Dreamers. He’s promised to revoke Obama’s executive orders within the first 100 days of his presidency.

Trump has also offended many Hispanics with derisive comments about Mexicans and a federal judge overseeing a lawsuit against Trump University. According to polls, Trump is doing worse with Latino voters than any GOP presidential candidate since 1996. Trump claims that his support among Hispanics is stronger than many realize.