Chuy’s (NASDAQ:CHUY) had its price target decreased by research analysts at Stephens from $44.00 to $40.00 in a research note issued on Wednesday, The Fly reports. The brokerage presently has an “equal weight” rating on the restaurant operator’s stock. Stephens’ price target suggests a potential upside of 2.07% from the company’s previous close.

Chuy’s (NASDAQ:CHUY) last released its quarterly earnings results on Thursday, May 6th. The restaurant operator reported $0.42 EPS for the quarter, topping the consensus estimate of $0.19 by $0.23. The firm had revenue of $87.70 million for the quarter, compared to analyst estimates of $81.04 million. Chuy’s had a return on equity of 9.28% and a net margin of 5.02%. Chuy’s’s revenue for the quarter was down 7.2% on a year-over-year basis. During the same period in the previous year, the company posted $0.01 EPS. As a group, research analysts forecast that Chuy’s will post 1.49 EPS for the current year.

Chuy's Holdings, Inc, through its subsidiaries, owns and operates full-service restaurants under the Chuy's name in 17 states, including the Southeastern and Midwestern United States. As of December 27, 2020, it operated 92 restaurants. The company was founded in 1982 and is headquartered in Austin, Texas. 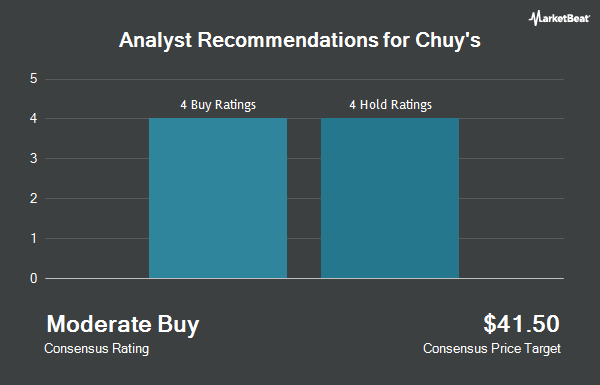 Receive News & Ratings for Chuy's Daily - Enter your email address below to receive a concise daily summary of the latest news and analysts' ratings for Chuy's and related companies with MarketBeat.com's FREE daily email newsletter.

Complete the form below to receive the latest headlines and analysts' recommendations for Chuy's with our free daily email newsletter: