Chr. Hansen Holding A/S (OTCMKTS:CHYHY) has earned an average recommendation of “Hold” from the eight research firms that are presently covering the firm, Marketbeat.com reports. Two analysts have rated the stock with a sell recommendation, five have assigned a hold recommendation and one has assigned a buy recommendation to the company. The average 12-month target price among analysts that have issued a report on the stock in the last year is $22.54.

Chr. Hansen Holding A/S is a bioscience company, which engages in the development of natural solutions for the food, nutritional, pharmaceutical, and agricultural industries. It operates through the following segments: Food Cultures and Enzymes; Health and Nutrition; and Natural Colors. The Food Cultures and Enzymes segment produces and sells cultures, enzymes, and probiotic products that help determine the taste, flavor, texture, shelf life, nutritional value, and health benefits of consumer products in the food industry. 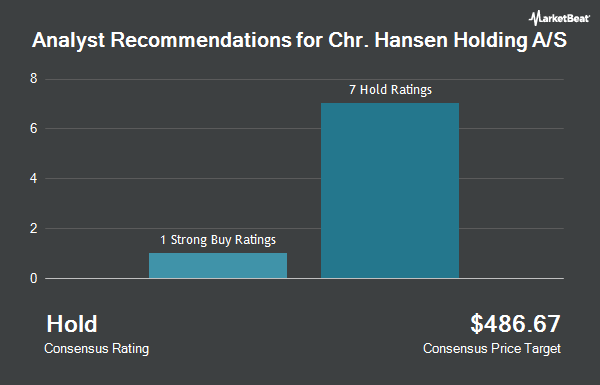 Complete the form below to receive the latest headlines and analysts' recommendations for Chr. Hansen Holding A/S with our free daily email newsletter: