Choice Hotels International, Inc. (NYSE:CHH) insider Elizabeth A. Redmond sold 6,721 shares of the firm’s stock in a transaction dated Thursday, September 23rd. The shares were sold at an average price of $125.84, for a total value of $845,770.64. The sale was disclosed in a legal filing with the SEC, which is accessible through the SEC website.

Elizabeth A. Redmond also recently made the following trade(s):

The company also recently disclosed a quarterly dividend, which will be paid on Friday, October 15th. Shareholders of record on Friday, October 1st will be paid a $0.225 dividend. This represents a $0.90 annualized dividend and a yield of 0.71%. The ex-dividend date of this dividend is Thursday, September 30th. Choice Hotels International’s payout ratio is currently 40.54%.

Choice Hotels International, Inc engages in the franchising and operations of hotels. It operates through Hotel Franchising, and Corporate and Other segments. The Hotel Franchising segment refers to the hotel franchising operations consisting of the company’s several hotel brands. The Corporate and Other segment deals with hotel revenues and rental income related to office building owned by the company. 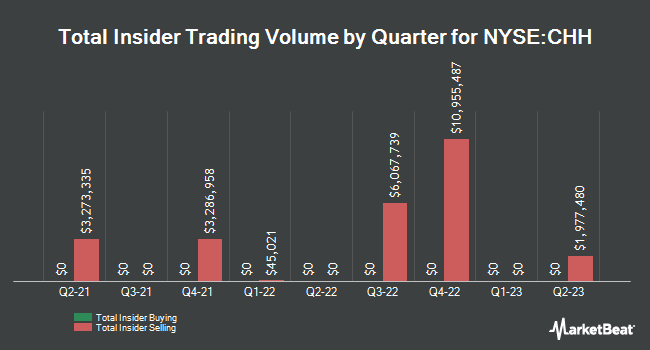 Complete the form below to receive the latest headlines and analysts' recommendations for Choice Hotels International with our free daily email newsletter: