Canadian Pacific Railway (NYSE:CP) (TSE:CP) issued its quarterly earnings results on Wednesday. The transportation company reported $4.48 earnings per share (EPS) for the quarter, topping the Thomson Reuters’ consensus estimate of $3.47 by $1.01, MarketWatch Earnings reports. Canadian Pacific Railway had a net margin of 29.66% and a return on equity of 32.77%. The business had revenue of $1.96 billion for the quarter, compared to the consensus estimate of $1.98 billion. During the same quarter in the prior year, the company earned $4.42 EPS. The firm’s quarterly revenue was down 4.0% on a year-over-year basis.

Shares of Canadian Pacific Railway are scheduled to split before the market opens on Monday, May 17th. The 5-1 split was announced on Wednesday, April 21st. The newly minted shares will be distributed to shareholders after the closing bell on Friday, May 14th.

The firm also recently announced a quarterly dividend, which will be paid on Monday, April 26th. Shareholders of record on Friday, March 26th will be paid a $0.7436 dividend. This represents a $2.97 dividend on an annualized basis and a yield of 0.81%. This is a boost from Canadian Pacific Railway’s previous quarterly dividend of $0.72. The ex-dividend date of this dividend is Thursday, March 25th. Canadian Pacific Railway’s payout ratio is presently 24.05%.

See Also: How Do Front-End Loads Impact an Investment? 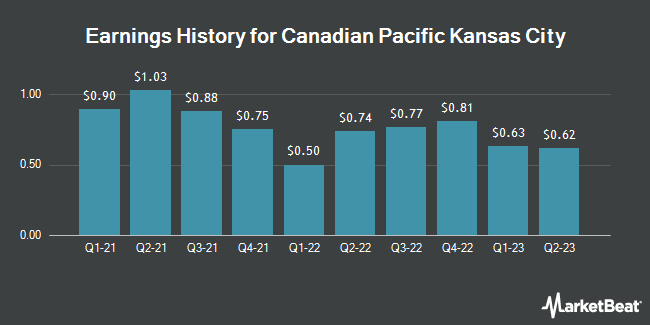