Analysts expect W. R. Grace & Co (NYSE:GRA) to post earnings of $1.27 per share for the current fiscal quarter, according to Zacks Investment Research. Two analysts have issued estimates for W. R. Grace & Co’s earnings, with estimates ranging from $1.27 to $1.28. W. R. Grace & Co posted earnings per share of $1.14 during the same quarter last year, which indicates a positive year over year growth rate of 11.4%. The firm is scheduled to announce its next quarterly earnings report before the market opens on Tuesday, February 4th.

According to Zacks, analysts expect that W. R. Grace & Co will report full-year earnings of $4.34 per share for the current fiscal year, with EPS estimates ranging from $4.33 to $4.35. For the next fiscal year, analysts forecast that the business will post earnings of $4.82 per share, with EPS estimates ranging from $4.70 to $5.00. Zacks Investment Research’s earnings per share calculations are a mean average based on a survey of research analysts that cover W. R. Grace & Co.

W. R. Grace & Co produces and sells specialty chemicals and materials worldwide. It operates through two segments, Grace Catalysts Technologies and Grace Materials Technologies. The Grace Catalysts Technologies segment offers fluid catalytic cracking (FCC) catalysts for the production of transportation fuels, such as gasoline and diesel fuels, and petrochemicals; FCC additives; and methanol-to-olefins catalysts for the conversion of methanol into petrochemical feeds, including ethylene and propylene.

Read More: What is a stock buyback?

Get a free copy of the Zacks research report on W. R. Grace & Co (GRA) 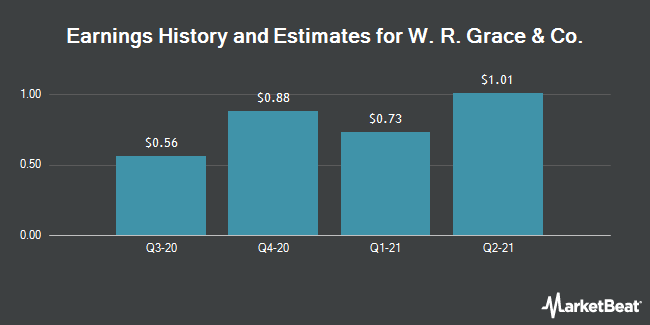 Stamps.com Raised to Buy at BidaskClub