BlackRock Inc. raised its holdings in Nutrien Ltd. (NYSE:NTR) by 3.8% in the 2nd quarter, according to its most recent Form 13F filing with the Securities & Exchange Commission. The institutional investor owned 2,057,589 shares of the company’s stock after purchasing an additional 75,347 shares during the period. BlackRock Inc. owned 0.36% of Nutrien worth $124,711,000 at the end of the most recent reporting period.

Nutrien (NYSE:NTR) last announced its quarterly earnings data on Monday, August 9th. The company reported $2.08 earnings per share for the quarter, missing the Zacks’ consensus estimate of $2.10 by ($0.02). The business had revenue of $9.76 billion during the quarter, compared to the consensus estimate of $9.65 billion. Nutrien had a return on equity of 7.23% and a net margin of 4.25%. The company’s revenue was up 15.8% compared to the same quarter last year. During the same quarter in the previous year, the firm posted $1.45 earnings per share. As a group, equities research analysts predict that Nutrien Ltd. will post 4.66 earnings per share for the current year.

The company also recently declared a quarterly dividend, which will be paid on Friday, October 15th. Investors of record on Thursday, September 30th will be issued a dividend of $0.46 per share. The ex-dividend date of this dividend is Wednesday, September 29th. This represents a $1.84 dividend on an annualized basis and a yield of 2.61%. Nutrien’s dividend payout ratio is currently 102.22%.

Nutrien Ltd. is a crop nutrient company, which engages in the production and distribution of products for agricultural, industrial, and feed customer. It operates through the following segments: Retail, Potash, Nitrogen, and Phosphate. The Retail segment distributes crop nutrients, crop protection products, seed, and merchandise. 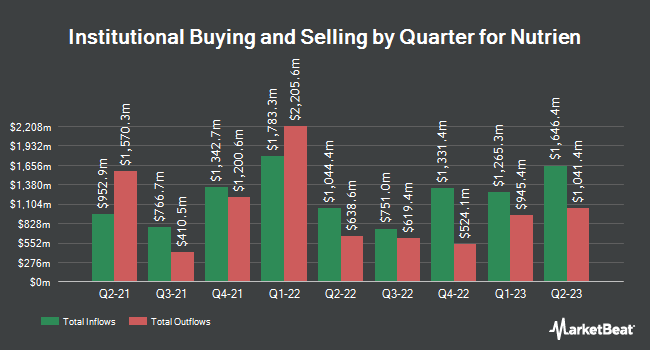 Receive News & Ratings for Nutrien Daily - Enter your email address below to receive a concise daily summary of the latest news and analysts' ratings for Nutrien and related companies with MarketBeat.com's FREE daily email newsletter.

Complete the form below to receive the latest headlines and analysts' recommendations for Nutrien with our free daily email newsletter: