Equities research analysts expect Ardmore Shipping Corp (NYSE:ASC) to announce earnings of $0.16 per share for the current quarter, according to Zacks. Two analysts have provided estimates for Ardmore Shipping’s earnings. The lowest EPS estimate is $0.15 and the highest is $0.17. Ardmore Shipping reported earnings of ($0.26) per share during the same quarter last year, which indicates a positive year-over-year growth rate of 161.5%. The business is expected to issue its next quarterly earnings results on Wednesday, February 5th.

On average, analysts expect that Ardmore Shipping will report full-year earnings of ($0.20) per share for the current year. For the next year, analysts expect that the company will post earnings of $0.77 per share, with EPS estimates ranging from $0.63 to $0.92. Zacks’ EPS calculations are a mean average based on a survey of sell-side research analysts that follow Ardmore Shipping.

Ardmore Shipping (NYSE:ASC) last announced its quarterly earnings results on Tuesday, November 5th. The shipping company reported ($0.17) earnings per share for the quarter, beating the consensus estimate of ($0.18) by $0.01. Ardmore Shipping had a negative return on equity of 6.11% and a negative net margin of 18.34%. The company had revenue of $52.10 million during the quarter, compared to analysts’ expectations of $29.98 million. During the same period last year, the business earned ($0.37) earnings per share. Ardmore Shipping’s quarterly revenue was up 6.5% on a year-over-year basis.

Ardmore Shipping Corporation, together with its subsidiaries, engages in the seaborne transportation of petroleum products and chemicals worldwide. As of January 31, 2019, the company operated a fleet of 27 double-hulled product and chemical tankers, including 21 Eco-design and 6 Eco-mod vessels. It serves oil majors, oil companies, oil and chemical traders, and chemical companies.

See Also: What are the qualifications of a portfolio manager? 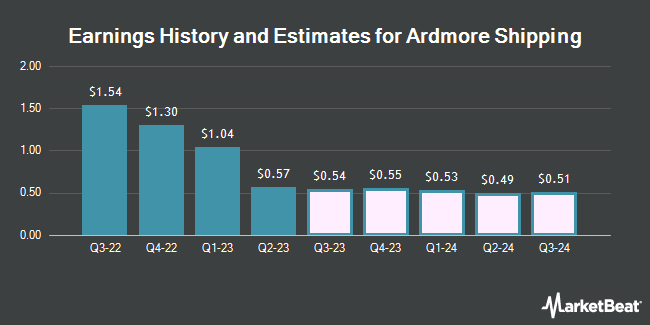