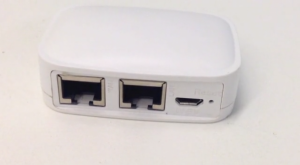 Anonabox has had its donations frozen on Kickstarter as the Internet router, which is designed to make the user’s activity online anonymous, has received increased backlash.

The router was priced at $45 and is operated on the software Tor, that accesses the Internet anonymously,

However, the device was then targeted by Redditors with accusations that the developers of the device misled customers and lied about Anonabox’s origin.

On Friday, via email, donors received notification that the project was canceled after a review by Kickstarter. The letter said that it was against the rules of Kickstarter to offer items that were purchased but claimed to be made.

When a project becomes suspended, the pledges are canceled, said a spokesperson for Kickstarter. The spokesperson said it was important to note that even if a project reaches its goal on Kickstarter, backers do not get charged until the period of funding ends on the project.

Therefore, the spokesperson said, if said project becomes suspended during its funding period, there is no money that changed hands at any time.

The contention on the project came from the claim of the designer that the router had been equipped with hardware that was custom built.

The truth is the origin of that hardware has come into question. Redditors during a discussion with August Germar the developer of Anonabox pointed out that the device resembled already made devices from China.

Essentially the Redditors accusation was that the developers of Anonabox were passing another router already available as one that was Tor-equipped.

The project that had started so popularly quickly became filled with controversy.

The makers of Anonabox wanted it to give online security to more people at a greater convenience.

In the past, Kickstarter has had to stop projects including a scam that was purported to raise money for a type of beef jerky.

Kickstarter’s project suspensions as they are called by Kickstarter are permanent.