July 14th, 2020 - Comments Off on Amneal Pharmaceuticals (NYSE:AMRX) Lowered to “Strong Sell” at ValuEngine - Filed Under - by Mark Dietrich
Filed Under: Analyst Articles - US - Investing
Tweet

ValuEngine cut shares of Amneal Pharmaceuticals (NYSE:AMRX) from a sell rating to a strong sell rating in a report issued on Friday morning, ValuEngine reports.

In related news, Director Jeffrey P. George bought 23,810 shares of the company’s stock in a transaction dated Friday, May 15th. The shares were bought at an average price of $4.16 per share, for a total transaction of $99,049.60. Following the completion of the acquisition, the director now directly owns 23,810 shares of the company’s stock, valued at $99,049.60. The acquisition was disclosed in a document filed with the SEC, which is available at this hyperlink. Also, Director John Kiely purchased 10,000 shares of the firm’s stock in a transaction that occurred on Tuesday, May 19th. The shares were acquired at an average cost of $4.53 per share, with a total value of $45,300.00. 26.32% of the stock is owned by company insiders. 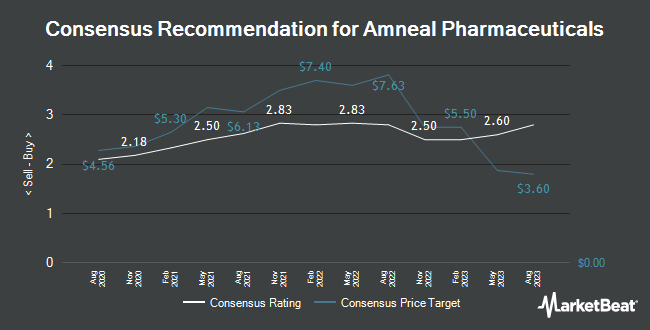