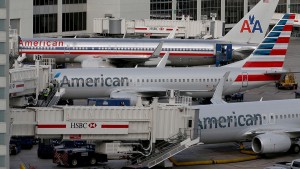 American Airlines Group will become a part of the S&P 500 starting Friday, when it replaces Allergan after it officially is acquired by Actavis in a deal that should be completed on Tuesday.

American’s stock on Tuesday opened at $52.63, which was 5% higher than its close on Monday. Joining the S&P has been seen by many as a boon for stocks since components are benefitted by being purchased by funds tracking the index like the Vanguard 500.

American stock was off by 6% since the start 2015 prior to Monday when the announcement came after hours. However, the stock is 30% higher year over year. That compares to a 12-month return of 12% for the S&P 500 index.

American’s market cap is close to $37 billion and is the result of a merger on 2013 of American and US Airways. The airline joins competitors Southwest and Delta on the index.

Douglas Parker the CEO at American said the largest global airline knew at one point it would be in the S&P 500 but this was sooner than most had expected. It is great news, added the airline’s CEO for shareholders and everyone else affiliated with the airline.

He added that the company enjoyed benefits from low prices of oil more than competitors did because the airline does not use derivatives on oil so is not locked into prices that are higher that were set prior to the fall in prices starting last June.

In January, Barclays reiterated its buy rating for American as they were encouraged by its cost trends. The bank raised a bit of concern over the softer passenger revenue of American, especially in comparison to the rest of the industry, but analysts feel that is offset from lower consumption of fuel.

In a wide-ranging look at the entire industry, the bank said American is its preferred stock amongst the larger airlines, although its overall top pick is Spirit the big discount airline.