Analysts expect that Alteryx, Inc. (NYSE:AYX) will announce $122.37 million in sales for the current fiscal quarter, Zacks Investment Research reports. Seven analysts have issued estimates for Alteryx’s earnings. The highest sales estimate is $123.50 million and the lowest is $121.00 million. Alteryx reported sales of $129.72 million in the same quarter last year, which would suggest a negative year-over-year growth rate of 5.7%. The company is expected to report its next earnings results on Thursday, November 4th.

According to Zacks, analysts expect that Alteryx will report full-year sales of $525.61 million for the current fiscal year, with estimates ranging from $522.46 million to $527.72 million. For the next year, analysts anticipate that the company will post sales of $613.83 million, with estimates ranging from $564.40 million to $637.80 million. Zacks’ sales averages are a mean average based on a survey of sell-side research analysts that cover Alteryx.

In related news, Director Dean Stoecker sold 10,000 shares of the firm’s stock in a transaction on Wednesday, July 21st. The stock was sold at an average price of $79.96, for a total transaction of $799,600.00. The sale was disclosed in a legal filing with the SEC, which can be accessed through the SEC website. Over the last quarter, insiders have sold 57,500 shares of company stock valued at $4,151,150. Company insiders own 12.50% of the company’s stock.

Alteryx, Inc engages in the provision of self-service data analytics software. Its subscription-based platform allows organizations to prepare, blend, and analyze data from a multitude of sources and benefit from data-driven decisions. The company was founded by Dean A. Stoecker, Olivia Duane-Adams, and Edward P. 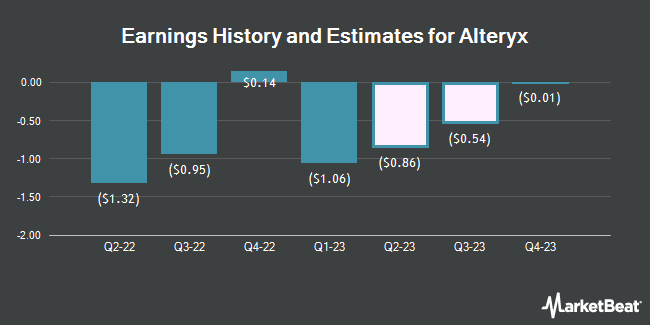 Receive News & Ratings for Alteryx Daily - Enter your email address below to receive a concise daily summary of the latest news and analysts' ratings for Alteryx and related companies with MarketBeat.com's FREE daily email newsletter.

Complete the form below to receive the latest headlines and analysts' recommendations for Alteryx with our free daily email newsletter: