Alteryx Inc (NYSE:AYX) CRO Robert Scott Jones sold 4,166 shares of the business’s stock in a transaction that occurred on Thursday, July 30th. The shares were sold at an average price of $168.17, for a total transaction of $700,596.22. The transaction was disclosed in a filing with the Securities & Exchange Commission, which is available through this link.

Alteryx (NYSE:AYX) last announced its quarterly earnings data on Wednesday, May 6th. The company reported ($0.10) earnings per share (EPS) for the quarter, missing the Zacks’ consensus estimate of ($0.09) by ($0.01). Alteryx had a net margin of 1.28% and a return on equity of 7.04%. The business had revenue of $108.80 million during the quarter, compared to analysts’ expectations of $105.64 million. During the same period last year, the company posted $0.04 EPS. Alteryx’s revenue for the quarter was up 43.2% on a year-over-year basis. On average, equities research analysts forecast that Alteryx Inc will post -0.12 earnings per share for the current fiscal year. 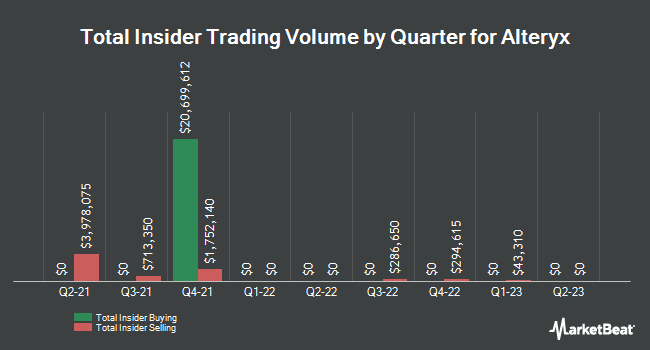 Receive News & Ratings for Alteryx Daily - Enter your email address below to receive a concise daily summary of the latest news and analysts' ratings for Alteryx and related companies with MarketBeat.com's FREE daily email newsletter.