Several research firms have issued reports on GDRX. KeyCorp started coverage on shares of GoodRx in a research note on Thursday, September 15th. They issued a “sector weight” rating on the stock. The Goldman Sachs Group cut their price objective on shares of GoodRx from $10.00 to $8.00 and set a “neutral” rating for the company in a research note on Wednesday, November 9th. Barclays reduced their price target on GoodRx from $13.00 to $9.00 and set an “overweight” rating on the stock in a research report on Tuesday, October 11th. JPMorgan Chase & Co. raised shares of GoodRx from an “underweight” rating to a “neutral” rating and cut their price target for the stock from $10.00 to $8.00 in a report on Friday, November 4th. Finally, Deutsche Bank Aktiengesellschaft reduced their target price on GoodRx from $9.00 to $7.00 in a research note on Thursday, November 10th. Fifteen analysts have rated the stock with a hold rating and six have assigned a buy rating to the company’s stock. Based on data from MarketBeat, the company currently has a consensus rating of “Hold” and an average price target of $13.28.

GoodRx Holdings, Inc, through its subsidiaries, offers information and tools that enable consumers to compare prices and save on their prescription drug purchases in the United States. The company operates a price comparison platform that provides consumers with curated, geographically relevant prescription pricing, and access to negotiated prices through GoodRx codes that are used to save money on prescriptions across the United States.

Want to see what other hedge funds are holding GDRX? Visit HoldingsChannel.com to get the latest 13F filings and insider trades for GoodRx Holdings, Inc. (NASDAQ:GDRX – Get Rating). 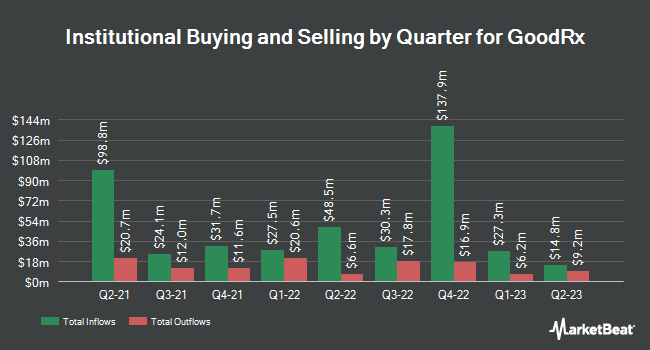 Receive News & Ratings for GoodRx Daily - Enter your email address below to receive a concise daily summary of the latest news and analysts' ratings for GoodRx and related companies with MarketBeat.com's FREE daily email newsletter.

Complete the form below to receive the latest headlines and analysts' recommendations for GoodRx with our free daily email newsletter: