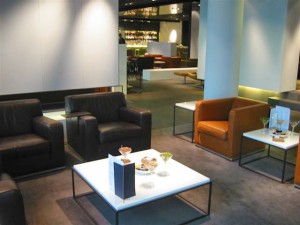 Airlines once again are upping the ante in first class service on international flights. However, this time around, it does not involve comfy chairs nor fancy meals.

The airlines are now more focused on giving wealthy fliers a free pass through airports, without having to come in conducts with everyone else.

American Airlines offers its international first class and other top customers’ private check in at terminals in New York, Miami, Chicago and Los Angeles. Travelers are exited through hidden doors that lead to the front of all security lines.

Delta will chauffeur top passengers who are on a tight connection in Minneapolis, New York, Atlanta or Los Angeles from the plane they arrive on to their next flight inside a Porsche. Those clients never need to enter the airport terminal.

The same is done by United at Newark, Houston and Chicago, but in a Mercedes-Ben GL.

Emirates Airline in its concourse in Dubai has separate floors for coach fliers and premium passengers. The two separate groups board through separate gates and never interact.

At Heathrow Airport in London private suites have been opened, originally designed to house the royal family, but now are for passengers that fly first class or business for just $2,500 additional. Fliers who use the suites receive their own security and immigration screening.

Lufthansa is offering passengers on first-class a completely separate terminal at their Frankfurt base. At the separate terminal are a cigar lounge, restaurant and dedicated officers from immigration. When boarding takes place the passengers are driven to the plane in a Mercedes Benz or Porsche.

The airlines idea is to provide an exclusive experience that is invisible and inaccessible to all those flying coach.

Some passengers are paying as much as $15,000 for the privilege of the latest perks offered by different airlines around the world.

The top customers of airlines mean big money for the carriers. At American Airlines, close to 70% of all revenue is generated from the carriers’ top 20 percent of its customers.