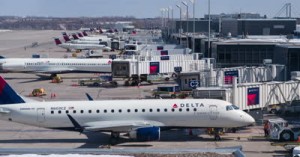 Airline stocks in the U.S. rose, extending one of the biggest rallies in the industry this year, after United Airlines and American Airlines led four air carriers in exceeding estimates for their quarterly profit.

Alaska Air Group and Southwest Airlines also beat projections for earnings, as the airline industry was the beneficiary of strong passenger demand as well as a drop of 9.7% in costs of fuel during the third quarter from the three months prior.

JetBlue Airways was the only airline of the group to fall short of Wall Street estimates on Thursday.

Demand across the U.S. as well as overseas seems strong, but domestically it is higher overall, said an Edward Jones & Co analyst.

United fell initially just after forecasting a possible drop during the fourth quarter in an important revenue gauge, but then was able to reverse its slide.

The earnings on Thursday capped the results for the six biggest airlines. Delta Air Lines, which is No. 3 behind American and United, announced last week that its profit for the quarter had beaten Wall Street estimates.

United’s earnings excluding some costs that were one off were $1.1 billion equal to $2.75 per share, which exceeded the Wall Street estimate of $2.70 per share.

United’s yield, or the average fare per mile, was up last quarter by 7.6% for travel in the U.S., the highest of any or the regions the airline flies.

United said that is passenger revenue for the fourth quarter from each seat flown per mile would range from a 1% drop to a 1% gain.

That is down from the amount investors were looking for and the stock initially dropped 4.9% but turned itself around to rise by 1.5%.

Bookings in Southwest for November as well as December look good said Gary Kelly its CEO. Southwest, based in Dallas, is the largest discount carrier and almost all of the airline’s revenues come from flights within the U.S.

American announced that its expects to have record earnings during the current quarter and for the full year,

The airline, based in Fort Worth, Texas said its profit excluding any items that were one-time, was up 59% to $1.2 billion, a new record, equal to $1.66 per share, which topped the estimate of analysts of $1.63 per share.