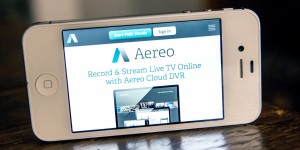 The filing Thursday of Chapter 11 came only five months after a ruling by the Supreme Court that said Aereo had violated the copyrights of broadcasters by capturing recorded as well as live programs on its miniature antennas and transmitted them to its subscribers who were paying between $8 and $12 per month.

The decision by the high court effectively forbade Aereo, based in New York from operating its business model, an attempt to give a less expensive alternative to nationwide cable television.

Kanojia said he knew the company a struck a nerve, created something very special and built something that was meaningful to customers.

Ultimately the challenges, he added, proved too difficult.

In its filing in a New York Bankruptcy Court, Ramon Rivera the CFO said receiving protection from the company’s creditors should give the business the breathing room needed to sell assets, recapitalize as well as restructure.

The company, which is privately held, has attempted to persuade regulators it should be declared eligible for licensing that is available to cable systems, but Rivera said timing was unknown.

Kanojia owns over 42% of the business and IAC/InterActive Corp, which is Diller’s, holds another 23%. Aereo raised equity financing of over $95.5 million.

The Supreme Court’s 6-3 decision was a big victory for broadcasters like CBS, NBC, ABC and FOX.

Aereo suspended the streaming service, which was at one time available in 11 metropolitan areas of the U.S., three days after the court announced its decision. On November 12, 74 employees were laid off leaving it with 44.

No comment was made by Diller’s IAC or the media mogul himself.