$82.18 Million in Sales Expected for BGSF, Inc. (NYSE:BGSF) This Quarter

Analysts expect BGSF, Inc. (NYSE:BGSF) to post $82.18 million in sales for the current fiscal quarter, Zacks Investment Research reports. Two analysts have provided estimates for BGSF’s earnings. The highest sales estimate is $84.00 million and the lowest is $80.35 million. BGSF posted sales of $69.70 million during the same quarter last year, which suggests a positive year over year growth rate of 17.9%. The company is expected to issue its next quarterly earnings results on Thursday, March 10th.

According to Zacks, analysts expect that BGSF will report full-year sales of $306.64 million for the current year, with estimates ranging from $304.81 million to $308.46 million. For the next fiscal year, analysts expect that the firm will report sales of $327.81 million, with estimates ranging from $325.77 million to $329.85 million. Zacks Investment Research’s sales averages are an average based on a survey of research firms that cover BGSF.

BGSF (NYSE:BGSF) last posted its quarterly earnings results on Tuesday, November 2nd. The company reported $0.45 earnings per share (EPS) for the quarter, topping the Thomson Reuters’ consensus estimate of $0.32 by $0.13. BGSF had a net margin of 3.74% and a return on equity of 18.41%. The firm had revenue of $82.35 million for the quarter, compared to analyst estimates of $81.01 million. During the same period in the prior year, the firm posted $0.35 earnings per share.

BGSF, Inc engages in the provision of staffing services. It operates through the following segments: Real Estate, Professional, and Light Industrial. The Real Estate segment provides office and maintenance field talent to apartment communities and commercial buildings. The Professional segment provides IT professionals with expertise in SAP, Workday, Olik View, Hyperion, Oracle, project management and other IT staffing skills to client partners on a national basis.

Read More: What Every Investor Needs to Understand About Secondary Public Offerings 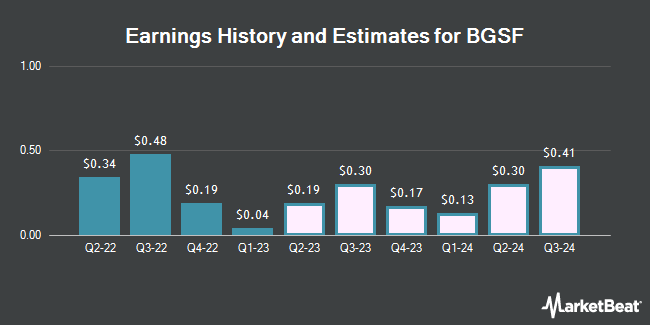 Receive News & Ratings for BGSF Daily - Enter your email address below to receive a concise daily summary of the latest news and analysts' ratings for BGSF and related companies with MarketBeat.com's FREE daily email newsletter.

Complete the form below to receive the latest headlines and analysts' recommendations for BGSF with our free daily email newsletter: